Today I’ll be reviewing the NYX Double Stacked Fibre Mascara. I don’t have very short eyelashes – they have magically grown over this year it’s crazy! But I do struggle to hold a curl. On any normal day that I’m wearing makeup I only apply mascara to my bottom lashes. I know most people apply it to their top lashes but I don’t see a point because they end of drooping an hour or so later. I love putting mascara on my bottom lashes because it lengthens them and remains looking natural.

My go-to mascaras would be:

Anyways, let’s get onto the review! This was the first time I’ve tried something like this. Previously I’ve tried lash primers but I found that they did nothing as well.

Stack ’em up! This incredible fibre formula stacks your lashes with all of the drama you could ever imagine. In just three simple steps, you’ll be batting luscious-looking lashes and collecting suitors wherever you go.

Pile on the volume and exaggerate your lashes beyond belief with our new Double Stacked fibre mascara!

For most recent ingredient list, please refer to packaging.

As I mentioned above, this was new to me so I was pretty intrigued by it. The mascara tube is thick and so is the wand (I’m used to thinner ones). It’s very black and the wand collects a lot of mascara in one go, I found that I had to wipe some mascara off because it was just too much.

You use the mascara first then go in with the fibres and end with mascara. I found that the first step didn’t do much to my lashes, I much prefer the mascaras I mentioned above.

The fibres were pretty messy to put on and half the time they didn’t even stick to my lashes.

Finally, I put on the last coat of mascara and I was pretty underwhelmed. The result didn’t make my lashes look amazing, it just kind of looked messy.

Scroll down for photos!

Please keep in mind I wear glasses and I have terrible vision haha. I did my best to take the pictures. All photos taken on an iPhone 7 main camera.

My natural lashes – photos done on the other eye for comparison. 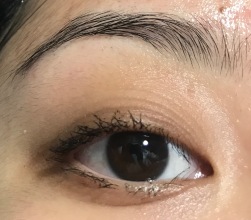 Just a few coats of mascara.

A few coats of the fibres.

This product definitely was a miss for me. It just didn’t seem to work well for my lashes and I was left pretty disappointed after wanting to try this product for so long.

As I mentioned above, it dispenses too much product at once which seems wasteful.

So messy to use! I ended up getting some fibres in my eyes a few times as well.

Honestly it just made my eyelashes look cluttered and spider-like.

I guess you can already tell what I’m going to say – it’s a no from me. I had also tried this with pre-curled lashes and it was the same result. This didn’t do much for my lashes besides make them look very messy. I’m so disappointed because I had high hopes for it.

That’s all I have for this week, thanks for reading! If you’ve tried this before let me know your thoughts on it! I wish this worked out for me though.

Hi there, I’m Irene and I’m from Sydney, Australia.

On my blog, you’ll find a new blog post every week, ranging from skincare reviews to beauty hacks.

For any enquiries, please email me or fill out the contact form.

Don’t forget to check out my IG @icxbeauty